In September 2017, our class 9b went on a 5-day-trip to ham with Mrs Echte and Mrs Zimmermann. Nottingham is a city which was founded by the Anglo-Saxons in 600 A.D. It is famous for its lace-making industries and the legend of Robin Hood. Moreover it is Karlsruhe's twin city - and the town where we have our partner school, Trinity Catholic School.

On 25th September, we met at 8:30 AM in Karlsruhe Main Station and took a 9 o’clock train. After an exciting trip through four countries and the Eurotunnel we finally reached Nottingham and our "Igloo" Hostel in the evening. A little later, Mrs Echte gave us a tour of the centre of Nottingham, where we saw some of the old and interesting buildings, like the Council House.

The next day, we met our partners! After a nice welcome ceremony they showed us around the school and took us to their classes. The afternoon on that day was special because the English students took part in a sponsored run around the school to raise money. But some of the English teachers were so kind to offer workshops for us: In one we made funny films with iPads and in the other we made picture frames and key chains with tiny torches. Back in town, the next event was waiting for us: We went to the cinema and watched the movie `Victoria and Abdul`, which was about the friendship between Queen Victoria and her Indian servant Abdul. We all liked the film a lot and understood it really well.

27th September was our second day at school, in which we had 3-4 periods depending on what year our partners were in. After lunch, we had one more period with our partners, and then there was a very big workshop, which was different to the ones on the first day because we had to teach the English students a few German sentences, which were then recorded on iPads - some results were quite funny...

In the evening, we ate at an all-you-can-eat restaurant called `World Cuisine Buffet’ with some of our English partners. This restaurant is quite large and offers a great variety of international food. In our big group, together with the English kids, we had a lot of fun.

On 28th September we went sightseeing in town. First we visited the National Justice Museum, where we learned something about the British justice system in the past. There were even actors who were dressed up and who told and showed us what life in prison used to be like. The National Justice Museum itself was a prison until the 15th century, then a police station and a court until the late 20th century.

In the afternoon, we were shown around the most famous building of Nottingham, the Council House, by the Lord Mayor himself, whose role it is to represent his town. He told us about the history of Nottingham and we were also invited for tea. We learned for example that Nottingham's history would not have been possible without German and French influence and that the Council House is "only" 90 years old. We were most impressed by the big Dome (61 metres high), the signature of the Council House.

In the evening, we had lots of fun playing indoor mini golf with some of our English friends, sadly our last activity with them.

On 29th September, we spent the whole day on trains again, until we arrived in Karlsruhe late in the evening.

We enjoyed staying in Nottingham and would have liked to stay longer. It was particularly interesting to experience the school day of the English students because it is so completely different to ours. 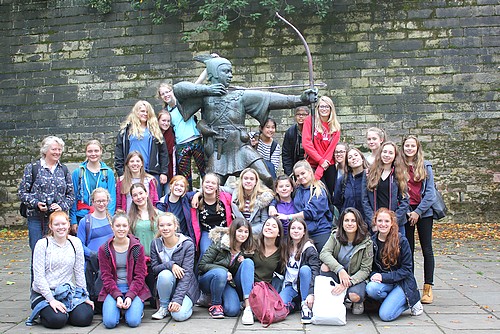